The University of Juba employed lual, the first-ever graduate to be given a job at the institution, from April 1982 until his death on 17 September 2013. Those who worked with Lual commended him for his excellent character and commitment to learning. Lual was fluent in Thok Nath (Nuer), English, Arabic, and several South Sudanese languages and dialects and was well regarded as an academic.

Outside of his teaching and public administration work, Lual found talent and purpose in writing. From 1995 until his passing, Lual contributed articles to English newspapers, and he worked on the Thok Nath-English Dictionary: Eastern Jikany Version. Lual Chany Chol was also an author of Book titled the ” Education Problems in Southern Sudan” published in the Arabic Language in 1992.

In 2010, Lual became a member of the then Southern Sudan Referendum Commission, where he and other members fought with Northern counterparts to ensure a credible referendum conducted in accordance with the stipulations of the Peace Agreement. Lual personally challenged delays suggested by the referendum chairperson and was committed to his cause.

According to those who knew him, Professor Lual Chany Chol was one of the unsung heroes of South Sudan. Though he has passed, his memory and his story live on in this book. 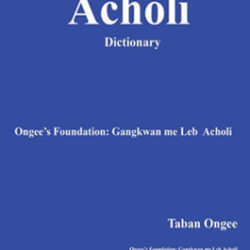